Product of the 80’s Tripple Thr3at is an Omaha entertainer with a tripolar lifestyle where he copes with being a gangster, hustler, & gentleman, & expressing it through music. Spending most of his childhood in Minneapolis discovered his love for entertainment at a young age, when he stared as Simba in his preschools reenactment of the Disney Block Buster “Lion King” & remembers seeing tears of joy from the audience due to his performance. Tripple Thr3at continued with theater through elementary & middle school, but stopped in high school due to peer pressure, & fear of the stigma that came with being involved in Drama in an urban high school.

Tripple Threat moved back to Omaha during his early teen years, were he was introduced to the street life, but was also introduced to hip hop, after one of his close friends was shot by rival gang members Tripple Thr3at responded with a freestyle that garnered decent feedback. Addicted to the attention he was getting from putting his words together, Tripple Threat began freestyling & writing everyday, even in school, & while hustling in the streets.

Living a fast & crazy life Tripple Threat dropped out of school his senior year, but evenutally got his G.E.D months later, shortly before moving back no Minnesota were he eventually was jailed for Larceny, & drug & weapon possession. Oddly enough the experience changed his life being the 1st time he opened a book, a broadened his vocabulary.He picked up several trades while in prison & developed a love for real estate.

Once out of jail he decided to turn his life around, not just for himself, but as a promise to his mother, who at the time was terminally ill.

Fast Forward 2017 Triple Thr3at is ready to release his 1st solo Ep “Party of 5” expected to drop early April. Described as “Good Ghetto Poetry” the 5 track project will include tracks for the ladies, the hommies, & those who want to hear Bars, with popular records “Paparazzi” & “James Harden” follow him everywhere. 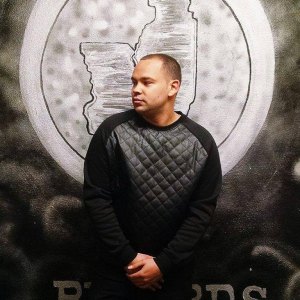