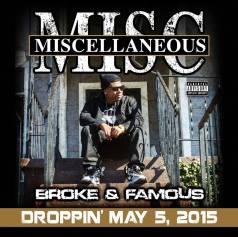 Growing up in the hard streets of Memphis, Tennessee Miscellaneous has had his share of hardships. From multiple arrest, being shot twice and paralyzed for 6 months, to coming from two drug addicted parents. Miscellaneous began to pit his pains, fears, and desire on paper. A gifted artist, he takes his listeners on a jorney through the life and struggles of a man with a negative past of being incarcerated and overcoming it by focusing a postive future.

Broke & Famous the Album, coming May 5th in Itunes, and select stores. The Broke & Famous Tour kicks off March 3rd with performances, radio, and tv appearances through out Missouri, Illinois, and Iowa. For more info on any dates, collabs, opening performance slots, or more from March 3rd to March 7th text 3146296404.

One thought on “Miscellaneous (@Miscdaboss) #Broke&Famous the Biography, the tour, and upcoming album”