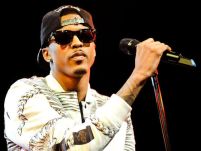 This is what rising hip hop singer August Alsina spoke during a concert in Little Rock, Ak. Alsina was cruising through the crowd on top of his security team during his performance when an onlooker decided to pull him down and take his hat.

This hat is told to be a gift from his deceased brother for whom he owes his success to.

Immediately after this incident he instructs the Dj to kill the music and demands the audience to return his hat. During the silence you start to hear yelling, tussle , and tasers, with no clear visual from the concert video of what was to take place. Moments later Alsina cancels the remainder of his show.

Not sure if he has gotten his hat back yet.