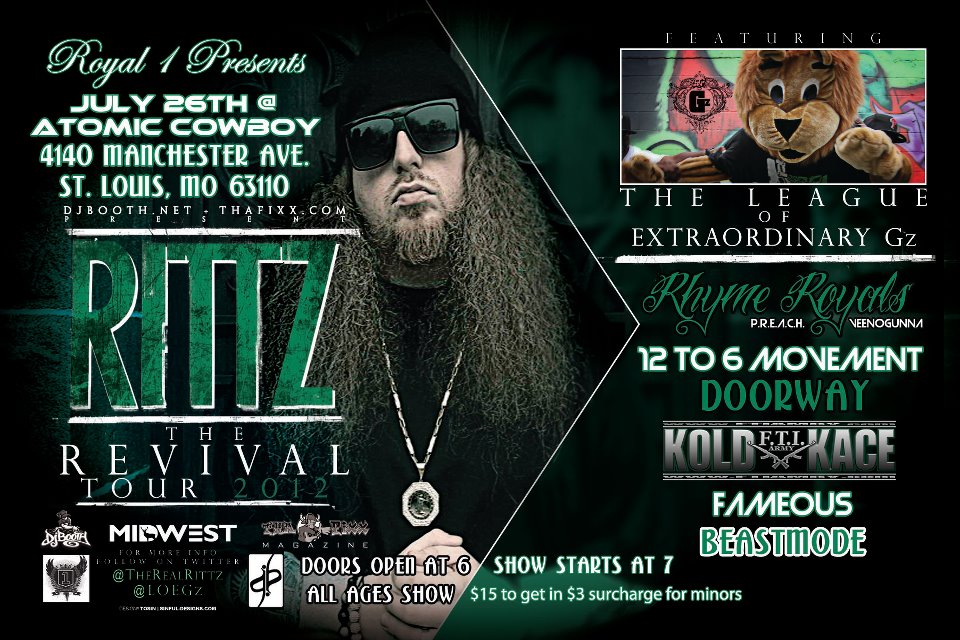 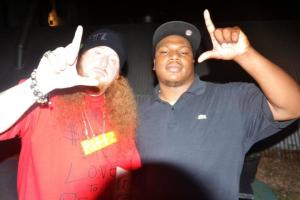 Good things happened 6/26/2012 when Ritz touched down in St. Louis for the revival tour, at the Atomic Cowboy. It started off with a lot of great local indie talent, White Owl, Preach, and plenty more. Special guest League of extraordinary G’z entertained the crowd before and during their performance, especially with their mascot Lion. They brought a new sound I wasn’t used to hearing from Texas artist. I wasn’t able to catch the beginning of Ritz performance but when but with the song I came in on caught my attention immediately. He gave an excellent stage show and even stayed for most of the after party which included performances from So & So, Step or Get Left, and special guest Tef Poe.

Overall it was a good show well organized, zero confusion. Only things I noticed that was a downer was the song selection of The Legendary Dj Sno, the heat, and long performances from opening acts. Sno played a lot of urban/ club music which I really enjoyed but, the crossover crowd wasn’t too enthused with Yo Gotti & 2 Chains. I always knew that when you put a bunch of Black people together it gets hot and hell & I never experienced a bunch of white people bunched together until that day. The end result was that a cool breeze swept through the crowd….bull shit it was hot as hell. Salute to the bear Mascot   he jepradized his health to entertain us all, lol. I enjoyed all of the performance’s but found myself getting tired of hearing them after the 1st 10 minutes of each set.

After Ritz performed his set we caught up with him for an interview.   He gave us good answers as we asked about his cracker influenced rap name, the Caucasian rapper time gap, and more. After the camera stopped rolling we continued to talk for a moment. With his humble words, and obvious hunger I became a fan of Ritz & if he comes back to St. Louis I will come see him & so should you. Shout out to Royal1mangement.com for bringing him to town.

Find me on facebook,twitter, & instagram @whobeta. All concert photo’s from Regime Photography 931-538-9415.