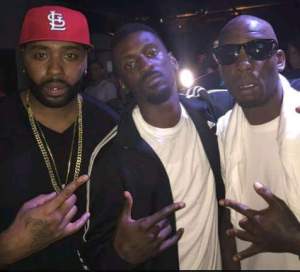 “Squash the beef with Averb over the weekend..Some New York n***** call me to side against my hometown and I refuse to do that.. I refuse to let negative energy continue to destroy us..all I can do is lead by example people.. Live learn love life” Rip The General”

Over the Weekend (June 20th) ,local hip hop pioneer Rip the Genreal and Famed battle rapper Aye Verb, also from St.Louis, were to appeared on opposite sides of a battle line, once again after a longstanding beef that lead to past violence between the two. Instead, what came out of it was one a the most positive moments in St.Louis hip hop in some time.

During Aye Verb & Hitman Holla’s 1st ever tag team battle appearance together things where fluent until K Shine called Verbs old nemesis to the stage to cosign incidents of their past beefs, but as unexpected the St.Louis rappers stood in solidarity and showed each other respect making for a “gottem” moment that paused the battle for a minute or so.

During an interview with Battlerap.com both Aye Verb and Rip discussed how they had the drop on K Shine an DNA, & Rip the General stated that he felt bad for deceiving K Shine, but could’t go against the home team. This is one of the greatest battle moments in St.Louis battle history, & I’m proud that grown men found a common ground to stand united. Check out the interview below.