Funk Volumes, Dizzy and Jarren Show was one to remember from the time I walked to the door to the very end. 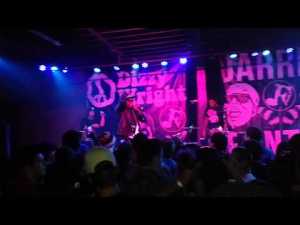 I remember being told that it started at 8pm, and arriving at 9 Pm assuming that I wouldn’t miss a thing. By the time I entered the Ready Room Jarren Benton was already on stage and seem to be there a while. The crowd of about 200 people, were full of energy, and about 30-50 people were even allowed to hit the stage and rock out during his set, (which is something I’ve never seen before btw).

After Jarren Benton’s set, there was about a 30 minute interlude. Some suggested back stage action or what ever, none of my business. With St.Louis’s unique taste in music the Dj bounced around from genre to genre, in a hit or miss fashion trying to capture the vibe of the crowd ultimately getting it right, with a mixture of Waka Flocka Flame, Mgk, and Lil John to say the least.

Once Dizzy Wright hit the stage the crowd was on 10, as he wore a U.S flag designed shirt, in honor of the 13th anniversary of 9/11. His set consisted of several mosh pits, that his security team didn’t seem to thrilled with an a couple of crowd awesome crowd surfs that at one time looked like a crowd walk. 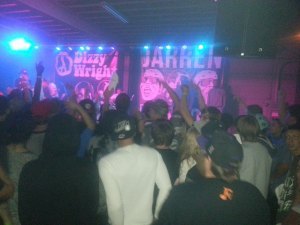 Overall for this to be my 1st Funk Volume concert it was an experience full of 1st, and people looking to have fun. They had dope merchandise on sell as well. As far as who had the crowd more on their feet, you’ll have to tweet me @Whobeta .

This show, made possible by Wasted Potential is part of a bigger series of concerts they are bringing to the Ready Room in September which includes TDE’s Ab_Soul with special guest Bas September 24th, and Big Krit in October for info on any of these shows or more on wasted potential head to their website  http://wastedpotentialpresents.com .