Nice To Meet Ya: Meet LuhDave 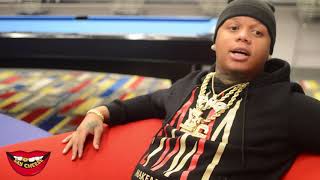 Lets send uplifting energy to Teaxas for rising star Yella Beezy. The artist know most for his hit record “Thats on Me was shot in Lewisville, Texas a suburb in the Dallas Forth Worth area at about 3:30 Am Oct 14th.

XXL reports “The shooting occurred on the Sam Rayburn Tollway around 3:30 a.m., reports the Dallas News. Beezy, born Adrian Brown, was reportedly driving on the tollway when another vehicle pulled alongside his and started letting off shots. Over a dozen rounds were fired, according to police. Authorities arrived on the scene and the rapper was rushed to a nearby hospital. The 26-year-old MC was reportedly hit multiple times but is recovering from his injuries. The news has been verified by Beezy’s team, who have notified XXL that the rapper is in stable condition.”

Dallas area artist Mr.Go Get it gives a performance that landed him in the top 5 selection for the 4th Midwest Best Showcase at Studio 618 January 24th

Dallas based artist Curtis Mayz makes his 1st performance outside of his home town at the Studio 618 10 hours away from the DFW area, as he competes for $1000 given by DJ @whobeta , Galaxy Media Group and SOE Clothing.

He put on an enjoyable performance bringing his southern sound to the middle of the map, the only question was when was he going to take his jacket off. #MWB4