In what might be the last Midwest Best $1000 showcase,#MWB9 proved to be the most challenging. From the high level of competition, to the summer heat that unexpectedly plagued the 1st day of Autumn, & the timely replacement of the main sound system that caused the the show to start a lot later then expected, mainly people were emotional,& antsy the entire night, & a venue that had over 300 people at its peak was reduced to 50-100 at its end. 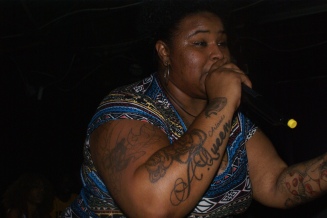 With so much talent hitting the room from all over the Midwest choosing 1 Midwest Best winner was complicated, & after narrowing it down to the top 5 which included Miss President of Chicago, A Queen & Nee Nee Babi of Cincinnati, Mississippi Chris from… of course Mississippi by way of Springfield, Illinois, & Mz.Triggs who has lived all over the middle of the map including Little Rock, Denver, & Memphis, it was a 4/5 chance that the next Midwest Best winner would indeed be a female, & 2/5 chances that the winner would be from Cincinnati. Indeed the odds were in the favor of A Queen of Cincinnati, Ohio as she was announced Midwest Best Winner number 9.

What happened next in Midwest Best history. So many people brought their fans out & both Hard Head Family & Factz of East St.Louis brought out 17 people causing them to split the second $500 prize which is a 1st & also the 1st time some 1 from the 618 brought the most people to the showcase that has always been held at Studio 618.